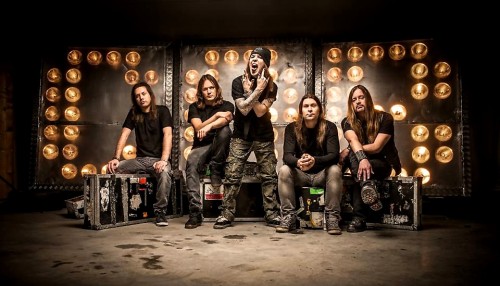 “At certain points I guess the new album was easier than the last one,” Laiho continues, “but it’s never easy to write an album, that’s for sure. I always hit a wall at some point trying to put the parts together, but when I look back now on the writing and recording process for Halo Of Blood, it does seem that it went a little smoother this time around.”

In a previous interview (found here), keyboardist Janne Wirman and drummer Jaska Raatikainen confirmed that Laiho remains the creative core of the band, as ever, but when it came to arranging the new songs it was more of a group effort for this album. Perhaps one of the main reasons Halo Of Blood turned out the way it did.

“Maybe, I don’t know,” says Laiho. “For me it was pretty much as its always been. I write everything, bring the songs to the rehearsal space and we jam on it and put the parts together. I’d say that this time around everybody spoke up as opposed to just two guys. Maybe that’s the difference.” 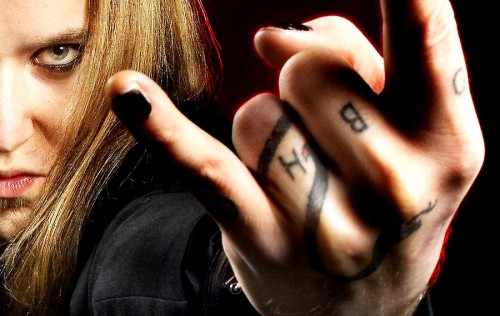 No question that Laiho and his bandmates have topped themselves with Halo Of Blood, more for the new flavours added to the Bodom arsenal than the familiar fixings. Take, for example, the blastbeats as the foundation of the title track.

“I told Jaska that he was going to have to do blastbeats, so props to him because he told me ‘Dude, I haven’t done that in years,'” Laiho reveals. “But I told him, ‘Come on, you’re a pro, you can pull it off…’ and he did. Jaska practiced his fucking ass off and he had it down in a week.”

Between ‘Halo Of Blood’ and the balladic ‘Dead Man’s Hand On You’ – songs that are very different from each other and everything else on the album – you have to wonder where the inspiration for the two songs came from.

“That’s a good question. I have no idea. The song ‘Dead Man’s Hand On You’, I don’t even know how that came about. I think I came up with the main riff and decided we should try it with clean guitars, which is something we haven’t done since the first album. Janne came up with the idea of playing the grand piano on top of it, and it just shaped up to be that sort of mellow super-dark song. It was something totally new for us so it definitely was a challenge, and fuck, I live for challenges. It was awesome to make it happen and make it believable.”

It’s funny how people have been singing Halo Of Blood’s praises for it’s back-to-the-roots vibe, yet it’s ‘Halo Of Blood’ and ‘Dead Man’s Hand On You’ that always come up in interviews.

“I know (laughs). ‘Dead Man’s Hand On You’ is definitely one of my favourite tracks on the album; the title track and that one. Like you said, everyone has been pointing out that Halo Of Blood sounds like the first three albums but they always mention those two songs.” 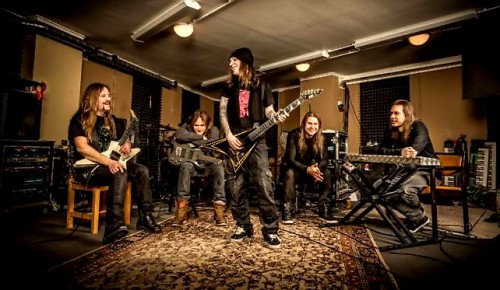 And no Children Of Bodom release would be complete without a few cover songs waiting in the wings as bonus tracks or b-sides. Halo Of Blood sports two; Roxette’s ‘Sleeping In My Car’, and Bananarama’s ‘Cruel Summer’ complete with guest solo by Annihilator guitarist Jeff Waters. Old hat for COB after 15 years in the game, and it supposedly never gets boring doing up new cover songs.

“Fuck no, and I don’t think that’s ever going to happen because the fact of the matter is we have so much fun doing cover songs,” Laiho states, blunt and straightforward. “Sometimes we try and pick the most retarded songs we can find, like disco or something, and once again it’s a challenge to do something like that. Take a disco song and dress it up in metal, but we want to make it sound professional. It’s supposed to be funny, but it’s not supposed to be a total joke.”

Halo Of Blood also breaks the COB tradition of crap (or at least questionable) cover art, which has graced their last three albums (Are You Dead Yet?, Blooddrunk, Relentless Reckless Forever). Like his bandmates, Laiho is completely satisfied with the final product.

“It’s pretty fucking awesome (laughs). I’m really happy with the artwork, and I’m supposed to say that because it’s the new album, but I really mean it. It fits the album perfectly, and even if you hadn’t heard the album or you didn’t know anything about Children Of Bodom, it definitely sticks out and grabs your attention.”

At press time the band was gearing up for the European leg of the Halo Of Blood tour. The new album, which has effectively given Children Of Bodom a new lease on life, is strong enough to warrant at least five new songs in the set, but according to Laiho that’s not going to happen. Not yet…

“We’re always going to have to play the old shit,” says Laiho. “We’re not going to be one of those bands that makes the mistake of playing the new album all the way through on tour. That’s not what the fans what to hear, which is sad but true. They want to hear the old stuff. We try to play something from each album, and with the new songs we do a couple of them to see how people react to them live. After one tour it’s safe to say which songs we can drop.”

All photos yanked off the official Children Of Bodom Facebook page, found here. Check out Halo Of Blood here.

2 thoughts on “CHILDREN OF BODOM – Reaper Madness: Bleed And Feed”