‘Drop Dead Cynical’, ‘Unreal’, ‘Trinity’, ‘Massive Addictive’ ‘Skyline’ and ‘Digital World’ are guaranteed to become fan favourites, charged with more adrenaline than some folks give Amaranthe credit for. There are two ballads to be had this time out – ‘True’ and ‘Over And Done’ – both of them loaded with radio potential and too smart for the suits making programming decisions. The album winds down with the heaviest song of Amaranthe’s career to date, ‘An Ordinary Abnormality’, featuring the sextet pulling out all the stops and crushing any ridiculous notions that pop metal has no balls.

It’s nice to hear how Amaranthe avoided disaster by not rehashing the formula of their first two records. Their three-vocalist attack (female, male, cookie monster – in that order) added a certain level of unique from the get-go, but wouldn’t have been enough to make Massive Addictive the sleeper hit it is. This time out, clean singers Elize Ryd and Jake E. show up where you least expect them, harmonizing and trading-off vocal parts more than ever before. And their voices are huge. Case in point on ‘Digital World’ – one of Amaranthe’s strongest songs ever – the exchanges on ‘Unreal’, and Ryd’s vocal nuances and insane range on ‘Danger Zone’. New resident growler Henrik Englund Wilhelmsson (Scarpoint) is a major player on the record rather than merely a hellish enhancement, even taking the lead and stealing the show on ‘An Ordinary Abnormality’. And with guitarist Olof Mörck being one of the primary songwriters, the album boasts riffs and leads by the truckload.

What makes the new album work ultimately is the live feel of the music. It’s all well and good to produce polished commercially appealing metal in the studio, quite another to take it out of the can on stage and blow an audience away with a full-on musical performance. Amaranthe have done just that for years, and the material on Massive Addictive is begging to be unleashed live. It’ll go over a storm and then some. 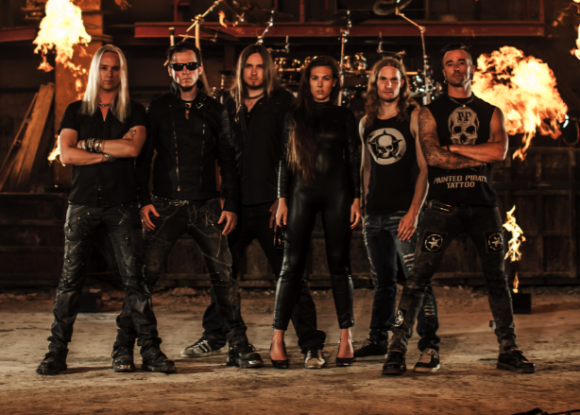 
For information and updates on Amaranthe go to their official Facebook page here.

One thought on “AMARANTHE – Massive Addictive: “Crushing Any Ridiculous Notions That Pop Metal Has No Balls””