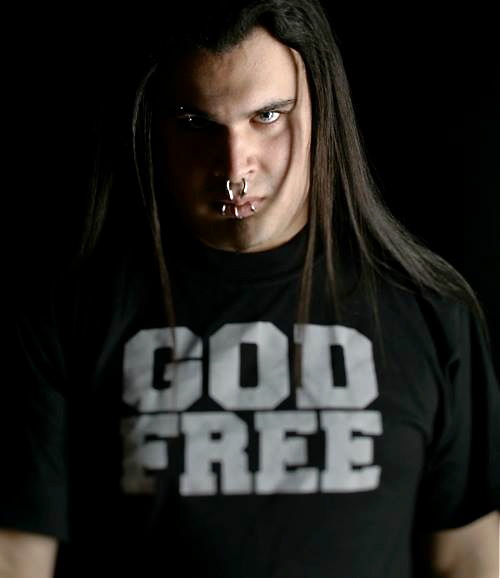 “Like most metalheads I was a musician,” Saffer begins, “and on the side for fun I would take photos of bands; live shots only at the time. I had been shooting bands live for about three years when I started college at Berklee College Of Music… and I hated Berklee. It was an eye-opener for me that I didn’t want to play music for the rest of my life, which to me was shattering as it was my dream since I was little. So, in this struggle I was talking to a friend/mentor, as his advice is extremely important to me. I said ‘I’m at a loss, I don’t know what to do. I hate Berklee…’ He asked me what I liked to do, and without hesitation I said ‘Shoot bands, shoot shows.’ He looked at me as if I was the last one to get it. That look he gave me changed my entire mindset from ‘Okay, I photograph bands for fun, now I can do it for a career…’ So I went to a quick photo school and continued on my career, which has slowly gone from mostly live photos to mostly portraits.” 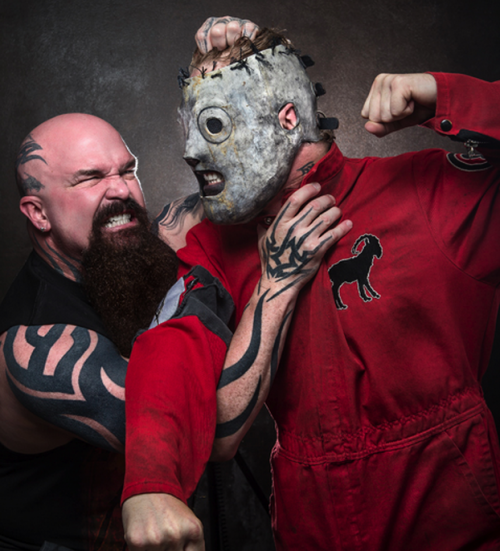 Saffer has amassed a large catalogue of material that includes live shots, band portraits, wedding photography, and semi-nude model portraits / art photos. Having had folks like Megadeth’s Dave Mustaine, Slayer’s Tom Araya, Behemoth’s Nergal and members of Slipknot in front of the lens, clearly Saffer has gained a reputation for being good at what he does. Band photos were his starting point “by a long shot,” which eventually graduated to nude model photography. However, any perverted goon can grab a camera and say “Hey baybee, I wanna take yer pitcher!” to get his rocks off. Seeing some of the portraits Saffer has taken, you have to wonder how he managed to earn the ladies’ trust.

“I started as many do, by doing a webzine,” says Saffer. “It was my own, doing interviews, reviews, photos and so on. At one point I started a section called Chaos Girls where I would feature female fans of metal with a mini-bio, and it ended up being a bad idea because they just ended up getting creeped on real hard by sketchy metal dudes. So that didn’t last long, but my relationship as a photographer to some of these models developed from there, where I ended up photographing them, and I was mostly interested in traditional fine art nude photography as I’m not too into anything beyond that.”

“Basically, I set up a photo profile where you could see my portrait work and model work. I had a few key models I worked with in the beginning, and in that time – about a decade ago – models would come to me in droves to shoot. It’s changed since. I’m not 20 anymore and photographing models is secondary to my music photography when for years they were fairly evenly balanced. I rarely seek out model shoots nowadays. I generally only work with those I already have photographed before, and the Corpse Paint project is actually the last big model project I am doing before kind of retiring from model photography altogether.” 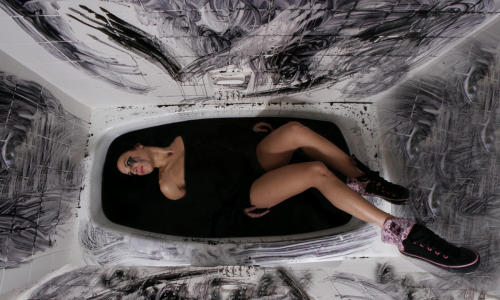 Resulting in a loaded question; is Jeremy Saffer a photographer or an artist?

“I believe that ‘art’ is in the eye of the viewer, not the creator. Honestly, I don’t understand most art. I’m not even into art really; not abstract art, anyway. There are some artists I really like, but they’re few and far between. But the bottom line is, in the immortal words of Oderus Urungus, ‘self anointed praise is bullshit,’ and I strongly believe that. I will never label myself by anything but facts. So I guess the question is better suited for you (laughs). What do you think? What am I?”

Which leads us back to the Silverthorn photo of Tommy Karevik, Alissa White-Gluz and Elize Ryd. It’s an impressive shot and an outstanding idea for a promo campaign, and says a lot about the original thinking going on behind the camera.

“For the ‘Sacrimony’ shoot I had the privilege of seeing a rough cut of some of the music video that day. I know Alissa is a screamer and a strong force, while Elize is more of a softer voice and a calming part of the song. So when we did that shot it was just natural to have the duality of the two, much like the classic devil and angel on someones shoulders. It played well with the video once it was released, and I think it fit all their parts perfectly. In many shots it’s not really planned out ahead of time. Basically, the camera goes to my eye, and while we shoot ideas happen both from myself and from the subject. Alissa is incredible; she has so many amazing ideas, even spur of the moment. She’s absolutely one of my top three favorite to photograph.” 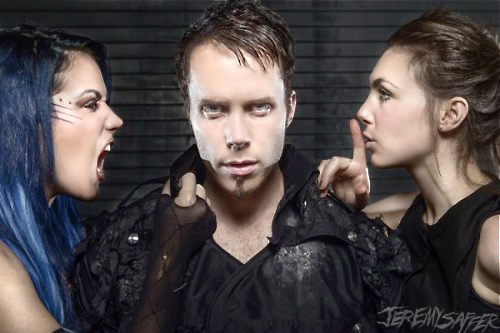 Speaking of Ms.White-Gluz, Saffer’s latest project directly involves her and former Misfits guitarist Doyle Wolfgang Von Frankenstein as the subjects of a 2015 calendar. Not really uncharted territory for Saffer, but kind of surprising given that Alissa has made it clear in the past that she’s not a fan of having her picture taken. Out of necessity (promo photos), sure, but for a calendar? It says a lot about their photographer / artist relationship.

“Without getting too long-winded about it, Alissa, Doyle and I have an incredible working relationship and friendship,” Saffer explains. “The first time Alissa and I got to do a real photo shoot, it just clicked. Every time she’s in town we do a shoot and both love the results each time. We’ve shot together so much that I know what she likes visually, and she knows how I shoot and pose, so we work very well together. Doyle is the same way. He loved the shots from our first shoot – one of the photos is his current tour promo, and a t-shirt and a poster – and from there we’ve done a shoot each time he comes to town. We had collectively been talking about doing a big Doyle and Alissa shoot and had planned for them to come to my studio for a couple of days. We ended up doing the shoot just before the big announcement of her joining Arch Enemy. We had a few concepts and ideas, some of which came to fruition, some of which are on the backburner for now, but we basically shot for two days, ate a bunch of excellent vegan food, and had a bunch of fun.”

“The photos from this shoot have been trickling out all year; some of them were used for the Arch Enemy announcement. I’ve released my biggest print series to date; 27 prints of Alissa and Doyle which they hand signed. That print series was planned for a long time, the calendar wasn’t. The calendar was kind of a byproduct of having these photos going into print form. Suffice to say, a slew of these photos were in holding for a while, which was on purpose. We had always planned to do an autographed print series with these photos. I was doing calendars of Ash Costello, Ghost, and it popped into my mind, ‘Hey, why don’t I also do a Doyle and Alissa calendar? That would be awesome!’ I emailed them both, got a response, and from sending that email to ordering the calendar I’d say it was about 12 hours or so. It all happened very quickly.” 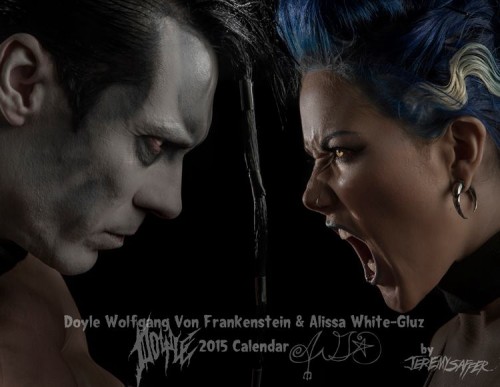 “In terms of Alissa letting her guard down for photos, we tend to like the same images from our shoots, we always agree on everything that goes out. It’s all about building a mutual trust, respect, and loving the results you get from each other, and knowing how to work together to make something incredible. I’m a strong believer in the fact that everything Alissa does is incredible. Doesn’t hurt that it’s impossible to take a bad photo of her, or Doyle for that matter.”

No to take anything away from Doyle or Alissa, but digital technology being what it is these days makes it easy for a photographer to fix things in the mix, so to speak. Saffer isn’t one of them.

“I started on film, even in school, so I was always taught to get it right in camera so you don’t have to edit much,” he counters. “I sort of had that old school mentality for a long time. I hated when I saw overly shopped photos and even said how much I hated it. In time I’ve come to learn that there is a difference between good editing and awful editing. Of course, you see things like movie posters, advertisements… I love that kind of photography, and that kind of stuff is super overdone, so every now and again I will do something like that. I think each photographer has their own vision of how their work should look, and while some like it, others won’t. Personally, I like a more natural look that overly photoshopped look in terms of the subject, but if something is a crazy digital manipulation, that kind of stuff is always cool to see.”

Asked if he has any musicians or projects on his wish list, Saffer laughs:

“Too many musicians on my wish list. For projects, just the Corpse Paint book and eventually my next book of band photography. It just costs so much to print that I need to crowd fund it and haven’t had time to really put that together, as I have no idea how to run one of those things.” 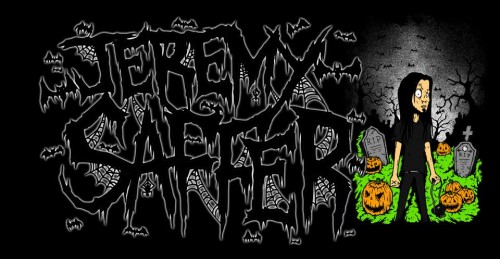 To check out Saffer’s work click here. Go to this location to purchase a variety of full colour prints, calendars, and bad-ass clothing.

All photos are the property of Jeremy Saffer, used with kind permission.

(In other words, ask permission before you jack the pics to use on your own site. Jeremy is a big guy and can give you a legal stomping if deemed necessary).