“It was at least one-and-a-half years of work,” Doro reveals, as the 30th Anniversary show in Düsseldorf was shot in 2014. “I have a guy that works with me, he’s done the last four DVDs, but I always want to be there to help take care of stuff so it’s definitely teamwork. I know best what the fans want to see, so there might be an editor that’s great at his job technically but I want to see excitement of the fans, I want to see their faces. Those things catch my eye but the guy doing the editing might have a different perspective. And sometimes I’ll have to tell the people ‘No, the other guy is playing the guitar solo, not him, so focus on the other guy…’ It’s like they always focus on the wrong guitar player unless I’m there (laughs). There’s a team of people that work on editing, colour grading, sound and all these other details, so it was months and months of work.”

If you’ve ever attended a Doro show you know that you get your money’s worth. Her stage time averages two-and-a-half hours each night depending on the venue’s curfew, so it’s no surprise she pushed the envelope even further for the anniversary dates.

“Each night was three-and-a-half hours so I had to let some songs go when we put the package together. My editor said it was too much material, that we couldn’t do a 12 hour DVD (laughs). We talked about making some of the songs that had to be dropped available as downloads but I really wanted to have them as bonus tracks, so we ended up with three DVDs. I love to play my whole history because every album had some highlight songs. And then there are songs like ‘Egypt (The Chains Are On)’, ‘Balls To The Wall’ and ‘Breakin’ The Law’ which were always so inspiring to me.” 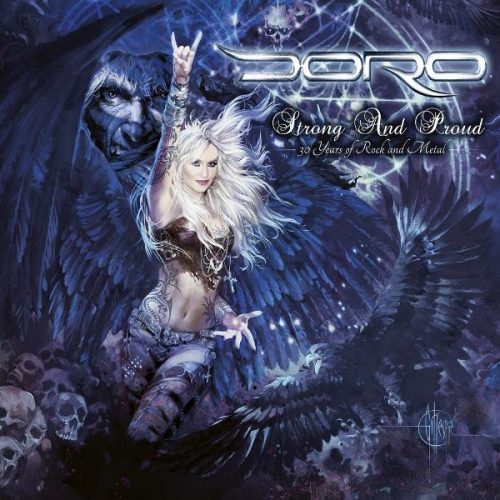 “There were some great moments doing those anniversary shows, like when Phil Campbell (Motörhead) came up to do ‘Breakin’ The Law’, because that was just a last second thing. Originally Lemmy was going to join us on stage but he was ill and had to stop the Motörhead set early. It was so damn hot that even if you were in perfect health it was hard to perform that weekend. And there were some spontaneous moments at the Wacken show, like when all the guests from the night came out to sing ‘All We Are’ sat the end. That wasn’t planned at all. Some of them didn’t know the lyrics but it didn’t matter, it was great fun.”

Technically, Strong And Proud is in fact two years late, as the celebration took place in 2014 to celebrate the 30th Anniversary of Doro’s 1984 debut with Warlock, Burning The Witches. One fan that was on time to the party is former Sodom guitarist Andy Brings (Double Crush Syndrome), who appears on the DVD as a guest on “Ich Will Alles”. Back in 2014, Brings released a single entitled “Hail To The Queen” dedicated to Doro and her 30 year career. Asked for her thoughts on the song and the sentiment, Doro is rendered momentarily speechless before launching into a play-by-play of how she found out about it.

“I’m so glad you brought that up and I hope Andy reads this story. I love Andy. He’s a great guy, so full of energy, heart and soul, always working so hard. But doing that song for me… oh my God (laughs). I was so blown away that someone would do that for me; it gave me chills. And it was funny because a guy who goes by the nickname Metal Racer asked me if I had some free time one weekend; with my touring schedule there was almost no time so I asked if it had to be on a weekend. Yes it did because it was a surprise for me, so I agreed to the one Saturday I had off. Nobody knew what was going to happen, not even my tour manager, but Metal Racer told me it was something I would like.”

“They picked me up in a big limousine with a driver but I had no idea where we were going. It turned out to be a small club, and I had to close my eyes when we went downstairs. There were some of the most diehard fans down there that had travelled from all over; it was a huge surprise. When Andy played ‘Hail To The Queen’, that was the greatest gift I’ve ever received. The song, the video, it was all so amazing. That was definitely one of the greatest days of my life.”