If a musician is fortunate enough to write a song – never mind a full album – that continues to resonate with fans years and decades after its release, he or she has every reason to be proud. Particularly in this day and age, when attention spans have been seemingly reduced to nanoseconds and music comes off as being as disposable for some people as used tissues or what passes for food at McD’s. When vocalist Sarah Jezebel Deva and guitarist / keyboardist Chris Rehn, the brains behind Angtoria, saw the release of the band’s one and only album in 2006, they never imagined God Has A Plan For Us All would embed itself so firmly in the hearts of those that discovered the music. By no means was the record a million seller, but Sarah’s and Chris’ respective histories – her with Cradle Of Filth, The Kovenant, Mortiis to name a few, him with Abyssos and Takida – guaranteed from the outset that people would be paying attention. Sadly, after a solid response to the album Angtoria just faded away without an explanation. Fourteen years later, however, Sarah revealed she and Chris had decided to take a stab at releasing new music for the Angtoria fans that have continued to hold the band so dear, albeit under the project’s original name, Torn Between Two Worlds. The first sign of new life is the single “The Beauty Of Deception”, a song that would be well at home on God Has A Plan For Us All… which is just what the diehard Angtoria fans wanted.

BraveWords: How long has this comeback been in planning even though you aren’t using the Angtoria name anymore?

Chris: “In planning… well, Sarah and I met back in 2001 and started talking about working together, so it’s been in planning ever since then. We’ve did some demo tracks with this particular project back in 2003, and that escalated and evolved into Angtoria in 2006. This particular track has been in planning for the last five years; not five years in the making, just in the planning. Sarah and I are both busy with our families and work, so trying to find the time to do things for fun versus for work… those are two different things. And when you’re working 18 hours a day and trying to set time aside to do music for fun, it isn’t easy.”

END_OF_DOCUMENT_TOKEN_TO_BE_REPLACED 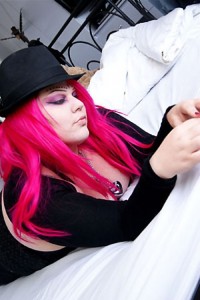 “So, to answer your question, Dan and I were directors with an aim, and that aim was to take over the world and to make sure people could notice a major difference in writing, recording and all aspects of production. We have the same musical tastes, or very similar, but of course we never once said ‘Right, gotta rip this band off’ or ‘Gotta sound like this band to give us huge record sales…’.”
END_OF_DOCUMENT_TOKEN_TO_BE_REPLACED