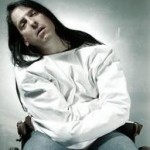 with BW&BK, Savatage / Trans-Siberian Orchestra guitarist Chris Caffery revealed that when it came time to work on a new solo album he committed himself to doing it on his own. As in locking himself away from the world in the name of his music for months at a time, surfacing occasionally for a dose of sunlight and to conscript a select few musician friends to fill in the blanks as needed. Once the material for the aptly named House Of Insanity had been hammered into a shape he was happy with, Caffery was left with the problem of mastering the record; a potentially monstrous task in its own right. Rather than take it on alone as well he turned to a member of his extended Savatage family, Jon Oliva’s Pain drummer Chris Kinder, both to preserve his sanity and to ensure a quality album. Caffery has gone on record as saying Kinder brought the songs on House Of Insanity together, citing the drummer’s production work with JOP as more than enough proof he was the right man for the job. Kinder is likewise pleased with the end result and considers the album yet another important step in his development as a producer and, ultimately, a musician.
END_OF_DOCUMENT_TOKEN_TO_BE_REPLACED