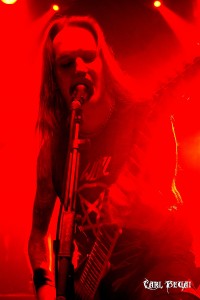 “I’ve done two of those Rock House DVDs,” he says. “I’ve done guitar clinics before, so it’s not like it was a new situation for me to do things from a guitar teacher’s point of view, but the first DVD was kind of awkward because I had a script to follow. Sometimes I had to make them stop shooting and do another take because they were making me say stuff that just didn’t sound like me. Stuff I’d never say (laughs). There’s a lot of cool stuff in there and it’s worth checking out, but I pretty much had to play along with it. I haven’t even seen the damn thing but if felt kinda weird. The second DVD, I think it brings out my real personality more.” END_OF_DOCUMENT_TOKEN_TO_BE_REPLACED