When it comes to music guitarist Jed Simon doesn’t do things quietly. From his early days with Armoros and Caustic Thought to a crushing decade in Strapping Young Lad and his continued work with Zimmers Hole, Simon’s life has been about being louder than everyone else. The mission continues in 2009 with the birth of Tenet, a solo project bubbling beneath the surface for the past 13 years that mutated into a band of familiar faces with an agenda based on grab-you-by-the-face brutality. Teaming up with ex-Forbidden guitarist Glen Alvelais, re-uniting once again with Zimmers Hole / ex-SYL mates Gene Hoglan (drums) and Byron Stroud (bass), Simon has unleashed a full scale old school thrash album entitled Sovereign that recalls the days when aggression wasn’t disposable paint-by-numbers kid stuff. It is the real deal, based on roots and feel rather than example. Tenet is not the answer to whatever gaping hole that may have been left in Simon’s life with the demise of Strapping Young Lad. It’s his next logical step as a musician who lives his metal rather than merely playing it.
END_OF_DOCUMENT_TOKEN_TO_BE_REPLACED 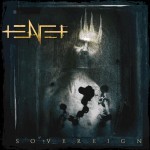 Having spent well over a decade as a member of Strapping Young Lad’s indestructible line-up, the fans are justified in expecting guitarist Jed Simon’s first solo outing to be a continuation of the SYL legacy. And that would be a big fat “nope.” Sure, there are moments on Sovereign that recall Simon’s days of sonic devastation circa the City record (‘Take A Long Line’, ‘Hail Hail’), particularly with drummer Gene Hoglan behind the kit and Byron Stroud ripping up the bass, but this is flat-out mean rather than trademark SYL aggressive. Tenet is about old school so-raw-it’s-bleeding thrash, and minus the big Devin Townsend production values the band has still turned in an unexpectedly brutal debut. A mere nine songs, Sovereign is a frantic beating within the realms of Death Angel’s heaviest Bay Area thrash punk moments and old, old, old Metallica; all shred and no brakes save for the half-speed rest during ‘Going Down’. END_OF_DOCUMENT_TOKEN_TO_BE_REPLACED