In a bizarre twist mid-way through Maximalism, Amaranthe blast a hole through the ceiling with “Fury” featuring Henrik Englund leading the charge and spitting venom for miles; the man’s screams are melodic death metal gold. We’re going to assume Ryd’s tip of the hat to Rihanna’s “Umbrella” in the same song is a well-placed joke. “Faster” and “Break Down And Cry” in particular recall The Nexus album’s best heavy moments, and “Supersonic” comes off as Maximalism’s most impressive track (after “Fury”) with some whacked-out(standing) Queen-esque vocal arrangements on top of the band’s trademark up-tempo delivery. “Fireball”, much like “Maximize”, is a safe Amaranthe song that displeases only those who hate the band. The album closes with an Elize solo spot on “Endlessly”, which sounds like something Disney would gladly pay a cool billion to Celine Dion to record for one of their animated films. END_OF_DOCUMENT_TOKEN_TO_BE_REPLACED

The two full metal songs on Breaking Point, the title track and ‘Splinter In My Soul’, originally surfaced as bonus tracks for the Japanese version of Amaranthe’s self-titled debut and their 2011 single ‘Rain’, therefore featuring original growler Andy Solveström in place of current rage vocalist Henrik Englund. Again, not a bad pair of songs, but it’s easy to understand why the tracks were never tagged as final album cuts, as they lack that elusive “something” to make them click. It would, however, be interesting to hear ‘Splinter In My Soul’ in a live setting with all its rampant Soilwork-ishness. END_OF_DOCUMENT_TOKEN_TO_BE_REPLACED 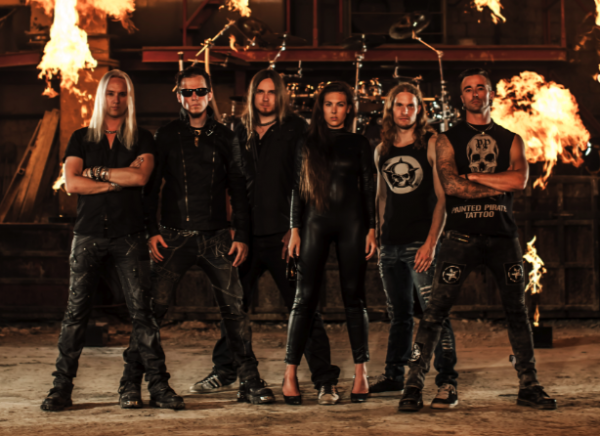 Jake: “Between the first album and The Nexus I felt a lot of pressure. There was an anxiety to deliver as something as good as what we did with the debut, and doing the first album was very relaxed. There was an almost instant success with the first album, and we only had six months to write and record The Nexus so there was a huge pressure on my shoulders to do something just as good. I think maybe that’s why we took the easy way out a bit on The Nexus by writing songs that were similar to the ones on the debut. It could have been called the Amaranthe II album (laughs), but with a few more influences put into the music. I thought when we started writing Massive Addictive there would be more of the same pressure, but I have to be honest and say that I wasn’t worried.” END_OF_DOCUMENT_TOKEN_TO_BE_REPLACED