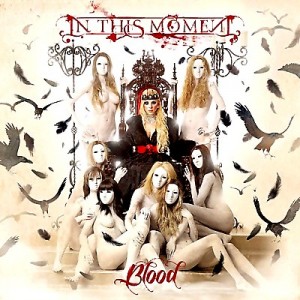 Blood strikes a balance between Maria Brink’s banshee screech and rich clean voice – the focus of every In This Moment record – with the heavy bumped up a notch from A Star-Crossed Wasteland (read: meaty guitars every which way you turn). The band explores a new arsenal of dynamics once again, making good on their reputation for shaking things from album to album so that no two are completely alike. Lead-off track ‘Blood’ shares airspace with Marilyn Manson’s ‘This Is The New Shit’, while ‘Adrenalize’, ‘Scarlet’ and ‘From The Ashes’ are as close to “expected” as the band is gonna give you. Where In This Moment truly shine are the melody-laced in-your face anthems ‘Whore’ – channelling Eminem’s monster hit ‘Lose Yourself’ – and the crowd-rallying ‘Beast Within’. END_OF_DOCUMENT_TOKEN_TO_BE_REPLACED

“I think we could probably do a few shows,” Wakeman agrees, “but the reception we got when we did some support slots (in 2007) was quite funny. I asked Sharon (Osbourne / wife and manager) is we could do it and she asked me ‘Why would you want to be fourth on the bill? There’ll be nobody here.’ This was at Wembley Arena. I said ‘Yeah, but if there are 5,000 people in it’s the equivalent to us playing 20 club shows. We might as well get it out of the way all in one go…’ (laughs). It was good, but people weren’t really expecting us because we got on the bill quite late. So, when we walked on stage people thought we were Black Label Society. You could see the looks of confusion on the faces in the crowd (laughs).” END_OF_DOCUMENT_TOKEN_TO_BE_REPLACED