It’s gotta be said that lead-off track ‘Wild Woman’ is standard fare for any Danko Jones release; no great shakes on the one hand but a smart move easing the fans into Fire Music as all bets are off from track #2 onwards. Frontman Jones has gone on record stating that a several songs on the album were inspired / influenced by the Misfits, and it most certainly shows. ‘The Twisting Knife’ followed in rapid succession by ‘Gonna Be A Fight Tonight’ and ‘Body Bags’ amount to almost 10 minutes of punk energy gift-wrapped in singalong attitude, echoed later on the album with equally speed-crazed ‘Piranha’ and ‘Watch You Slide’. END_OF_DOCUMENT_TOKEN_TO_BE_REPLACED

“Below The Belt did really well for us on radio in Canada, the States and Europe, so I’m glad it had the legs; definitely more than Never Too Loud did. In hindsight Never Too Loud was a bit of a misstep for us, but I wouldn’t really take it back now that we’ve done Below The Belt and Rock And Roll Is Black And Blue because I like bands that have hills and valley to their discography. Living through Never Too Loud for those one-and-a-half years wasn’t torturous, but the outcome of the session was kind of annoying. I’d rather put Never Too Loud out again, but only as the demos. When we had those demos we were going into a world class studio with a world class producer (Nick Rasculinecz / Rush, Death Angel) thinking that was the album, but it didn’t turn out that way. I resisted saying anything when we were doing press because I couldn’t understand what people were hearing that I wasn’t. When we were finishing Rock And Roll Is Black And Blue I went back and listened to Never Too Loud, which was critically the worst received album we’ve done, and I wanted to make sure we weren’t at that level. I didn’t realize how sonically poor Never Too Loud was compared to the more recent two albums.” END_OF_DOCUMENT_TOKEN_TO_BE_REPLACED 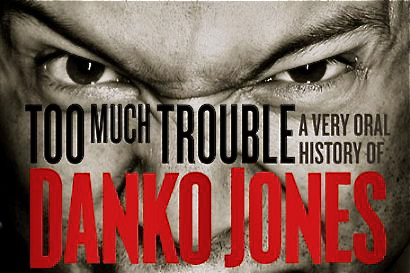 “The book was done by Stuart Berman, who worked on it for about two years,” says Danko. “He interviewed over 70 people that, all together, tell the story of our band. We didn’t oversee it because I don’t do that with people who make videos for us, write about us, all that. It’s like ‘Go crazy, man’. I think that if you free people up more on things like that you get a better outcome. Stuart was a good choice to write the book because he knows a lot of the people we know, and a lot of the people we have bad relationships with (laughs). He was a great person to track down old band members and bands we’ve had brushes with. A couple bands didn’t respond but there’s a enough drama in there to keep people satiated. With him writing the book those parties felt safer, which was good. I told Stuart that we weren’t going to censor anything they said.” END_OF_DOCUMENT_TOKEN_TO_BE_REPLACED