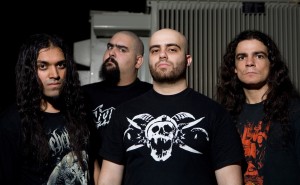 Dubai-based death metal bashers Nervecell are all about crushing stereotypes. Their agenda is entirely musical in nature and not at all politically or culturally motivated, contrary to what the mainstream media would have you believe about everything and everyone coming out of the Middle East. The whole “Nice guys finish last” adage has likewise been squashed, as the humble and soft spoken quartet – when they’re off stage, at any rate – have spent the summer and will be closing out 2009 as the first Middle Eastern metal band ever to tour through Europe. It’s a journey Nervecell earned with all-important European one-off festival shows in 2007 and 2008 and their Preaching Venom album, having made enough of an impression to warrant more dates, bigger crowds, and a growing fanbase. At press time the band was gearing up for an appearance at the prestigious Wacken Open Air in Germany, considered to be the metal equivalent of a “Yes We Can” banner. The world being what it is, however, it’s fair to say that Nervecell’s origins make them a something of a novelty on the European scene, resulting in a great deal of dubious curiosity and head-scratching prior to the inevitable full blown acceptance.
END_OF_DOCUMENT_TOKEN_TO_BE_REPLACED