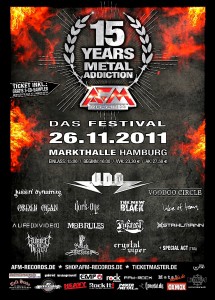 On November 25th and 26th, Hamburg-based AFM Records celebrated 15 years in the trenches. It was a remarkably well-organized weekend of work and play, featuring fine dining, an open bar (or two), great people, an early morning label showcase to introduce new AFM signings (that not everybody attended due to the late late late night), a hotel bar that never closed (and was abused accordingly.. all hail Motel One), culminating with a festival at the Markthalle in the heart of downtown. Rather than the usual cattle call of press hacks, the vast majority of folks invited to attend were in fact AFM business partners, responsible for keep the label in people’s faces over the last several years. Being one of the aforementioned journalists, it was an honour to be asked to come out on behalf of BW&BK for the whole knock-down-drag-out event, and it was certainly worth the time spent.

On the work end of things, the label presented priority releases for early 2012, including German glamsters Kissin’ Dynamite, Orden Ogan, Lyriel, Solution .45, Fear Factory, Buck Satan And The 666 Shooters (industrial country… really) and of particular note, Ministry’s comeback record, Relapse. This included a special video message from frontman / mastermind Al Jourgensen, and two tracks that are the closest Ministry will (n)ever get to a ballad.

As for the play side – other than the carrying on like kids in a candy store backstage – the Markthalle hosted 15 AFM bands on two stages, including U.D.O., The New Black, Voodoo Circle, Mob Rules, A Life Divided, Dark Age and Lake Of Tears. Doro Pesch, a former member of the label’s roster, attended in a strictly non-performance capacity but took plenty of time out for her fans backstage. As did Piet Sielck of Iron Savior fame, who soaked up U.D.O.’s show with us normal folk. And staff members from some of AFM’s international partners – INgrooves.com, Soundforge Music Group, Scream Magazine, Tangra Mega Rock Radio to name a few – kept the good vibes up in the rafters from the first glass of champagne. END_OF_DOCUMENT_TOKEN_TO_BE_REPLACED