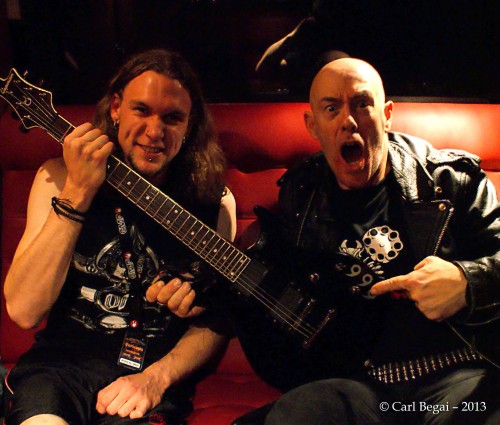 “The one thing I didn’t want to do, which was difficult, was compromise ourselves,” he adds. “We just said ‘Fuck it!’ and got up there and just did it. Having Leigh on stage with us made things a little less stressful. Mikey from Onslaught asked us if we were going to get rid of Jeff as Leigh learned more of the songs (laughs).” END_OF_DOCUMENT_TOKEN_TO_BE_REPLACED

The real old-schoolers out there are aware of the impact Venom had on the thrash metal scene when they clawed their way out of the UK muck in 1981 with Welcome To Hell and put out Black Metal a year later. Diehard Venom fans also remember when frontman Cronos left and was replaced by Tony “Demolition Man” Dolan for three albums and an EP from ’89 – ’92, a move that went over surprisingly well at the start. Fast forward through years of attempted reunions and aborted projects to 2010, where Dolan teamed up once again with Venom guitarist Jeff “Mantas” Dunn to form Mpire Of Evil. It’s a venture that could have gone to hell after the release of the Creatures Of The Black EP in 2011 – and not in appreciated Venom fashion – but instead the band buckled down for a full album (Hell To The Holy) and a North American tour with Onslaught to help get the word out. It’s a move that seems to have worked. 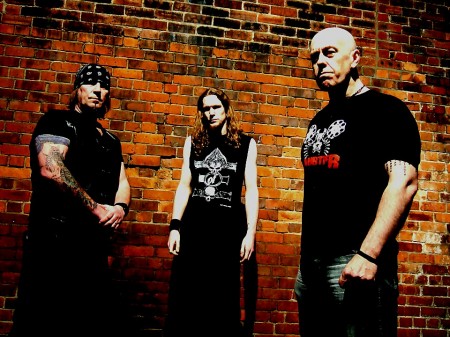 This year will see the release of Crucified, an album featuring re-magined versions of Venom songs from the Dolan era. Some folks will dismiss the move as a cash grab, of course, but those that have been paying attention and / or were lucky enough to see Mpire Of Evil live will give the band their due. As one of a handful of people that heard the album well in advance of the release, I can tell you Crucified is a jaw-dropper for anyone that knows the original tracks.

Dolan recently discussed where the idea for Crucified came from and why the Mpire decided to follow through at this early stage of the game.

“When we were on tour going through California, Marc (Jackson / drums) asked if I had any Venom stuff on me. I did in fact have a compilation CD with me, so we pulled that out and he commented that some of the material was great and that we should do something with it. That planted the seed for Crucified in a way. I’d spoken to Jeff about it, and there are certain songs that we quite like, but I thought it would be wrong for us to pick the tracks to be re-recorded. I thought we should ask the fans who like that material to choose the tracks they’d like to hear. The three of us went and made our own lists of the songs we personally would like to re-do, then we got the lists from the fans on Facebook, and made a master list of all the songs chosen. Whenever a song came up more than five or six times, we marked that one down for the album. Basically, we had the tracklist selected for us by the fans.” END_OF_DOCUMENT_TOKEN_TO_BE_REPLACED