Double Crush Syndrome is his new lease on musical life, a three-piece band hinting of everything from The Ramones to Baz-era Skid Row to The Mamas & The Papas. Yep, pretty basic three chord punch on the surface but big on the singalong hooks, with tracks ‘Yeah! Pain!’ and ‘She’s A Pistol’ sucking you in from the start even though you might be of a mind to dismiss it as pap. The You Filter is in fact a reminder that the Keep It Simple Stupid formula does work. ‘Blood On My Shirt’ and ‘Fuck You IS My Answer’ see DCS channeling Skid Row – ‘Get The Fuck Out’ and ‘Riot Act’ come to mind – while ‘I’m In Love With You’ and ‘With Me’ go in the opposite direction as two ‘60s cheese-flavoured tracks that deftly (thankfully) avoid the Travolta / Newton John Grease trap. An impressive collection of garage-band-with-skills songs, middle finger anthem ‘Die For Rock N’ Roll’, ‘We Cannot Be Ruled’ and ‘Blood On My Shirt’ coming in as the faves of the moments, all shred and attitude served up old school with choruses that stick. END_OF_DOCUMENT_TOKEN_TO_BE_REPLACED 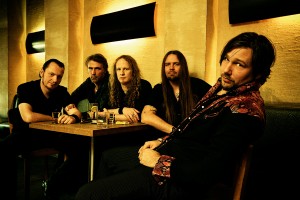 “The New Black started before I joined Sinner, and it was one of the good things in life that got the ball rolling: binge drinking,” Leim reveals. “Fabs (Schwarz/guitars) and me attended the Earthshaker Festival in 2006, and we watched the show by a headliner that I won’t mention because they sucked (Lordi), then hit the caiparinha booth. I told him that I had a lot of heavy riffs sitting around that I couldn’t use in The Traceelords because they didn’t fit. Basically, they were a bunch Black Label Society-type riffs. Fabs and I got along great, so the only logical conclusion was that we should form a new band. We got shitfaced and the question came up; ‘So, when should we start this new band?’ Answer: ‘I don’t know, what time is it? 10:45pm? Okay, we’ll start it at 11:00pm…’ (laughs). Fabs is a real musician, not just a rocker, so I sent him three song ideas, and a couple weeks after the festival we were at a party and he pulled out a CD with three songs on it. From there things moved along really quickly.”
END_OF_DOCUMENT_TOKEN_TO_BE_REPLACED