Truth be told Haven isn’t an easy listen at first even for the diehard fan, but once inside it’s very hard to leave. There are the signature attacks and flourishes one has come to expect of any Kamelot opus, but you get the feeling there was a meeting on the final day of mixing where the band members arm-wrestled their way bloody and broken to a final tracklist. Nothing about Haven is as one expects; some of the heaviest material (‘Liar Liar’ and ‘Revolution’) is shoved to the back half of the album, the signature ballad rewrites what we know about Kamelot’s penchant for pulling heartstrings, and much of the once-trademark symphonic attitude has been stripped back to make way for the band. END_OF_DOCUMENT_TOKEN_TO_BE_REPLACED

“I love the guys in Kamelot,” says Lione. “I love the band, I love the crew, we had a beautiful tour. I think we did something like 49 shows together in North America, South America and Europe. The response in every place we played was great, so I know that it wasn’t easy for Thomas (Youngblood/guitars) to make the decision to choose someone else. Of course he preferred to get somebody that doesn’t already have a big band because it’s easier to manage the schedule without having to worry about what else is going on. In the end, I appreciate that we’re still really good friends. Thomas sends me emails every so often, he’s interested in doing a side-project with me, and I’m sure he’s happy with his decision to bring Tommy into the band.” END_OF_DOCUMENT_TOKEN_TO_BE_REPLACED 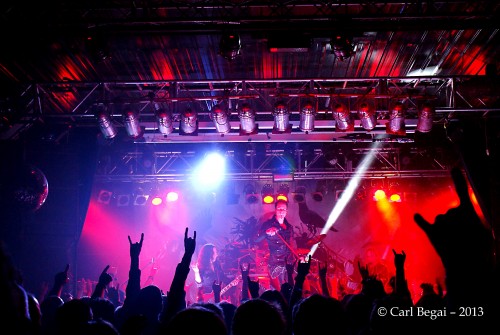 “We didn’t think anything bad about that in terms of coming out of it intact,” Youngblood insists. “I’ve seen a lot of bands do that successfully, and I think a lot of people forget how many acts have actually had to do that. We’ve grown into different territories since then. We played Australia for the first time with Silverthorn, we’ve done different parts of Asia like Korea and Taiwan, and the US is a much bigger market for us now.” END_OF_DOCUMENT_TOKEN_TO_BE_REPLACED

“I think fans are more willing to accept a band changing the singer as long as he or she has similar characteristics to the one they had for 13 years.” says Youngblood. “It would have been hard for us to bring in some power metal singer or an opera singer that didn’t have the tonal characteristics the fans want. That’s what I wanted for the band. For me, having Tommy in the band is a no-brainer.” END_OF_DOCUMENT_TOKEN_TO_BE_REPLACED