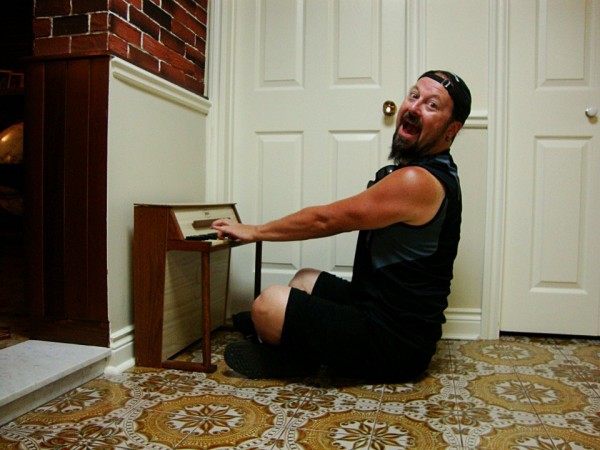 “I play guitar and a little piano…”

Those who can’t play write about it, and although I’ve been known to shred my way through Dokken’s ‘Kiss Of Death’ or Helloween’s ‘Future World’ on guitar without breaking my fingers or having a heart attack, making music is best left to people with a talent for it.

Born and bred in Toronto, this adventure began in 1993 when I joined the M.E.A.T magazine crew, providing show and album reviews before finally getting my first ever interview with Phantom Blue’s guitarist Michelle Meldrum (rest in peace). Having grown up as one of many rivet-heads immersed in Toronto’s vibrant rock and metal scene in the ‘80s, being on the inside was a high that eventually led me to Brave Words & Bloody Knuckles.

Kidnapped by an alien Medusa in 1995 and dragged kicking and screaming to Germany, I was dubbed BW&BK’s European correspondent at the tail end of 1996, making my presence as an actual writer (!) known in January 1997 with a Sentenced story that, in retrospect, still doesn’t suck. Since then it’s been a wild ride that has provided me with amazing experiences, a wealth of knowledge and a roster of artists, managers, label reps, journalists and photographers I’m proud to call friends. In 2005 I was asked to jump on board the BraveWords.com news team as well, further extending my grubby paws deeper into the metal world.

Over the years BraveWords has led to my involvement in writing band biographies for several record labels and independent artists, co-writing a book, proofreading and penning song lyrics, doing work as a translator, and being propped up in front of TV cameras for my views on all things metal. I’ve also earned the self-proclaimed title Master Of Typo Disaster for some impressive errors while dreaming up headlines for the BW&BK news feed, the best of the bunch being when I referred to Alice Cooper as a “sock rocker.”

Ultimately, for all the European coverage I provide for the recently updated and altogether sexier BraveWords, my head and heart remain focused on the Canadian metal scene, hopefully giving back to the place and people that made me what I am. I learned a long time ago that the saying “never a dull moment” was coined for this line of work. I’m not complaining.

** Please note that all text on CarlBegai.com (headlines, articles, stories, interviews, reviews, musings) are copyright of Carl Begai. I can’t very well prevent you from cutting and pasting content to make your own websites even more interesting, but if you’re going to do so please give credit where it’s due. I’m fully capable of giving a legal stomping to people who think they’re being clever, but I’d much rather not go down that road. Life is too short to waste it on unpleasant things.